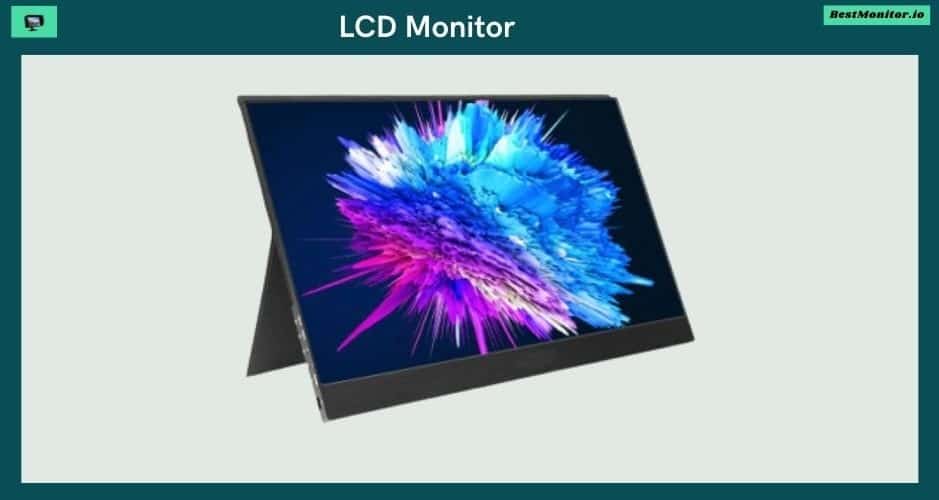 What Is LCD Monitor?: Increasingly popular, LCD monitors ( Liquid Crystal Display – Liquid Crystal Monitors ) are already considered, by many, essential for the use of the computer. Not for less: Besides taking up less space, they consume less energy and are more comfortable for the eyes.

In the next few lines, we will show and explain LCD technology details so that you can know its advantages and its differences from traditional CRT monitors (Cathodic Ray Tube).

What is LCD Monitor Technology

LCD technology is not used only in computer monitors. It is possible to find portable devices (such as video consoles, cell phones, calculators, digital cameras, and handhelds) whose screen is LCD. Besides that, it is worth remembering that notebooks have used this technology for years.

This is because LCD technology allows monochrome or color images and animations to be displayed on virtually any device, without the need for a picture tube, as is the case with CRT monitors.

As the name implies, LCD monitor are made of a material called liquid crystal. The molecules of this material are distributed between two polarized transparent sheets.

This polarization is oriented differently in the two sheets so that perpendicular polarizing axes are formed as if they formed an angle of 90º. Roughly, it is as if one sheet receives horizontal polarization and the other vertical polarization.

Liquid crystal molecules can orient light. When an image is displayed on an LCD monitor, electrical elements present in the sheets generate magnetic fields that induce the liquid crystal to “guide” the light that enters the light source to form the visual content.

However, a different voltage can be applied, causing the liquid crystal molecules to alter in a way that prevents the passage of light.

On monochrome screens (standard in watches, calculators, etc.), molecules assume two states: transparent (light passes) and opaque (lamp does not give). For screens that display colors, different voltages and filters that work on white light are applied to the molecules.

Meanwhile, the light of the device can come from special bulbs (usually fluorescent) or LEDs. It is worth remembering that LCD devices with a bulb have a specific duration.

LCD technology can be divided into several types. We will cite three below:

TN (Twisted Nematic): This is a type found in cheaper LCD monitors. In this type of monitor, the liquid crystal molecules work at 90º angles. Monitors using TN may have low image display in swift animations.

STN (Super Twisted Nematic): it is an evolution of the TN standard, capable of working with images that change state quickly. In addition to that, its molecules have improved movements, allowing the user to see the monitor image satisfactorily at angles many times greater than 160º.

GH (Guest Host): GH is a kind of pigment in the liquid crystal that absorbs light. This process occurs according to the level of the applied electric field. With this, it is possible to work with various colors.

A type of screen widely found in the market is the TFT, being used even in notebooks. This technology has as its main characteristic the application of transistors in each pixel.

Thus, each unit can receive a different voltage, allowing, among other advantages, the use of high resolutions. On the other hand, their manufacture is so complex that it is not uncommon to find new monitors that contain pixels that do not work (the so-called “dead pixels” or “dead pixels”).

This technology is widely used with liquid crystal, TFT-LCD (or Active Matrix LCD), which is expected to differentiate this equipment.

There is also a type called ” Passive Matrix” (DSTN – Double Super Twist Nematic), currently used in portable devices since this type of screen has a more limited viewing angle and a longer response time. For monitors, that standard is not recommended.

Some think that LCD monitors and plasma screens are the same, but they are not. The main difference of this type of screen is that each pixel creates its source of light. The image on the plasma screen is very sharp and has no distortion problems at the monitor’s ends.

To generate the light in each pixel, charged electrodes are used between glass panels, which originate small explosions of xenonium gas that, in turn, react with ultraviolet light, making the red, green, or blue phosphor of each pixel shine.

With the popularization of LCD monitors, it is increasingly common to find larger equipment on the market than traditional 14 “or 15″ monitors (the symbol “is read as inches).

About resolution, LCD monitors work with satisfactory rates, but there is a reservation: it is recommended that the monitor works with the solution that it receives from the factory.

This is because it will damage the image if a different rate is used. For example, the monitor may leave a black border around the image, in resolutions lower than the standard or, even, that it “stretches” the image, causing a strange impression to those who look at it.

Besides that, working with higher resolutions is practically impossible.

Response time is a feature that should be of great interest to anyone who wants to use the LCD monitor for games or videos. These are applications that demand a quick change of visual content.

If the monitor is not able to keep up with these changes, it will delay in altering the state of its pixels, causing unwanted effects, such as “ghost objects” in the image or moving shadows.

The shorter the response time, the faster the image update occurs. When this article was being written, it was already possible to find monitors that offer a response time of 6 ms (milliseconds), but the standard was 8 ms. For a satisfactory result, it is recommended to use monitors with this rate lower than 12 ms.

Contrast is another important characteristic in choosing LCD monitors. This is a measurement of the difference in brightness between the strongest white and the darkest black.

The higher that value, the more faithful the image colors will be displayed. This happens because that rate when it is a higher number indicates that the screen is capable of representing more differences between colors. For minimum fidelity, it is recommended to use monitors with a contrast of at least 450: 1.

In relation to brightness, the ideal is the use of monitors that have this rate of at least 250 cd / m (brightness per square meter).

Throughout this article, it is possible to notice the advantages of LCD monitors. However, they are worth reviewing again:

– An LCD monitor is much thinner than a CRT monitor, and it takes up less physical space

– An LCD monitor is lighter than a CRT monitor, making it easier to transport

– The screen of an LCD monitor is flat. CRT models that have this characteristic have minimal curvature

– The display area of ​​an LCD monitor is larger since, on CRT monitors, the housing covers the picture tube’s edges. This does not happen in LCD equipment

– The power consumption of an LCD monitor is much lower

– There is little or no radiation emission

As for The Downsides:

– LCD monitors have more limitation in the use of different resolutions

– The viewing angle of an LCD monitor is more limited. However, this only happens on older or lower quality models. Current models work with greater angles

– TFT-LCD monitors may have non-working pixels (so-called “dead pixels”). However, that is less and less frequent

– The price of LCD monitors is even higher than CRT monitors; however, this equipment’s values are becoming more and more accessible.

Last Words of What Is LCD Monitor

Today’s LCD monitors have many advantages over old CRT equipment. In addition to that, the prices of these types of devices are increasingly accessible, and technology is rapidly improving.

If one of these monitors is not worth purchasing for you yet, you will soon change your mind.