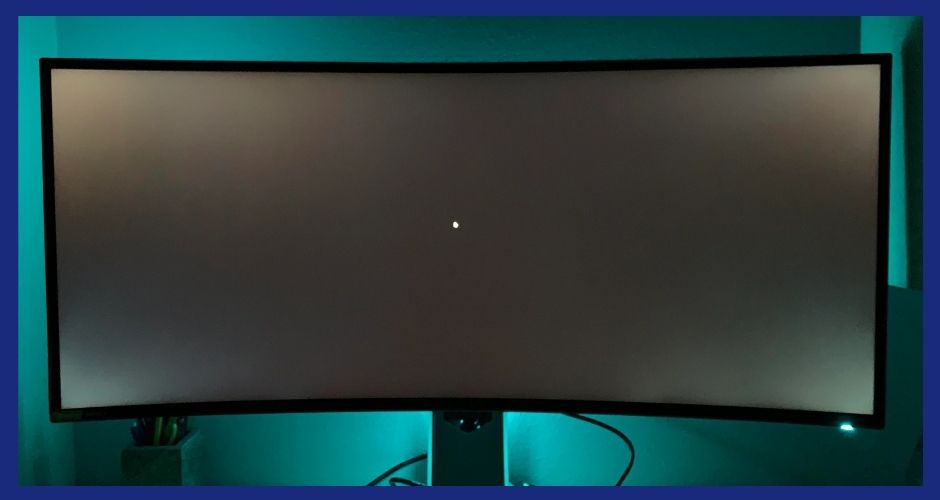 Have you ever wondered, “what is IPS glow, and how can I reduce it?” IPS glow is a significant challenge that many people face; however, it shouldn’t necessarily have to be this way if you ask us.

With this thought in mind, today, we’re looking at the key questions of what is IPS glow, and critically, we’ll look at how you can reduce it for your monitors.

Hopefully, this will help you find the optimal solutions for your own monitor management – because, after all, you should never have to struggle with a monitor that’s any less than the best it can possibly be.

What is IPS Glow?

The level of backlighting typically varies depending on your screen brightness, but in any scenario, it’s inevitable that a certain degree of “backlight bleed” can seep through into the final image.

This is a very similar concept to the issue of IPS glow – which can be a very real problem. With IPS glow, typically, you’ll notice a few glowing spots in the corner of your device’s screen.

At first, this may not always be noticeable, but you’ll most likely notice it significantly when the room is darker, or the device’s brightness is lower.

As such, it is often helpful to routinely check your device to ensure that IPS glow isn’t beginning to creep in.

Of course, it’s worth pointing out here that IPS glow is only an issue on IPS screens. As such, if your device has a TN or VA screen, you won’t need to worry about IPS glow and the like becoming an issue for your device.

What is an IPS Screen?

While we won’t spend massive lengths of time comparing the different types of devices, it’s worth considering how IPS, VA, and TN screens differ.

Typically, an IPS screen is an LED panel that features a much greater image quality compared to other types of screens; as such, many people invest in IPS screens for watching content or image editing; they’re also excellent for general productivity purposes.

However, VA screens can be considered a “half-way” between IPS and TN screens, often making them an excellent middle-ground option when it’s otherwise unclear which option might be best suited.

Fortunately, this is something that a professional tech advisor should be able to help with.

Which Monitor Type is Best Suited to My Needs?

So, when buying a new device, be sure to ask for support from a tech expert if you need further guidance and inspiration on the most suitable type of screen monitor for your unique requirements.

However, due to the potential disruption caused by IPS glow, many gamers may prefer to choose a VA screen that doesn’t come with such significant glare.

Read also- What is Flicker-Free Technology and PWM in Monitors?

The Challenge with IPS Glow

IPS glow isn’t really the end of the world – however, for many people, it can be a major source of frustration.

Indeed, since IPS glow represents a significant challenge, it can distract your attention away from work and using the screen as normal.

What’s more, as IPS glow worsens in severity, it’s common for it to become more significant of a challenge, which can mean that IPS glow – when not tackled early – can reduce your user experience.

In many cases, it’s easy to get a little confused between IPS glow and backlight bleeding. However, while both of these can be frustrating challenges, they’re actually very distinct from each other.

Backlight bleeding occurs when light shines through the panel, often around the corners or edges of the screen.

Unfortunately, this fault is often the result of poor designs, and very little can be done to resolve this complication.

However, fortunately, overcoming IPS glow is a little easier, and there are several ways that you can tackle this issue.

This is since IPS glow is not necessarily a technical fault per se with the monitor itself. Instead, IPS glow is rather a fault with the technology used to produce wider viewing angles.

This is why IPS glow challenges are usually only noticeable around the corner of the display and not at the edges, as can be the case for backlight bleeding.

While IPS glow can be a somewhat common challenge, the benefits often outweigh the drawbacks – and IPS glow likely won’t completely hinder your ability to use your device.

However, overcoming IPS glow, though not necessarily wholly possible, can be achieved through a few tricks of the light and the like.

How to Reduce IPS Glow in Your Device?

At this point, we’ve outlined some of the key things you should know about IPS monitors and IPS glow. However, we’ve yet to address how you can tackle this frustrating issue.

Fortunately, there are several simple ways you can reduce IPS glow in your device. These include the following options:

by changing the viewing angle on your IPS monitor device, you may be able to reduce the severity of IPS glow. While this won’t wholly tackle the issue, it can substantially help reduce the look of IPS glow on your device.

Sometimes, changing the brightness or darkness of your device’s screen can be enough to minimize the severity of IPS glow. This is best used in conjunction with a lighter room to make IPS glow harder to notice.

Did you know that changing your IPS monitor’s color profile may help reduce the severity of IPS glow? With this thought in mind, using a hardware color calibrator to calibrate your device’s display may help reduce IPS glow; contrast tweaks can also be helpful in this regard.

Distance your monitor further away

Since IPS glow occurs on individual pixels, it’s actually a very small problem – and it only becomes noticeable once several pixels begin malfunctioning, usually. However, once you notice IPS glow, you could distance your computer device further away from you, which will help make the individual pixels harder to notice. To compensate for this, you could increase the zoom slightly on your documents so that you’re still able to continue using your device as normal.

Massage the panel with a microfiber cloth

While this method won’t necessarily work in every scenario, it can be a simple change to help control IPS glow in your device potentially. However, it’s important to use a gentle microfiber cloth so as not to risk scratching the monitor screen, which could further impact the final viewing quality of your device. Why take this risk?

However, while the steps above may help reduce the IPS glow in your device, prevention is undeniably always better than the cure. With this in mind, we’d highly recommend taking steps to prevent IPS glow from setting in.

Perhaps the easiest here is simply to ensure you dim the lights in your room regularly; this makes IPS glow much easier to notice, helping you take steps to prevent the IPS glow from getting worse.

After all, IPS glow doesn’t typically show up in bright rooms, so if you only ever use your IPS monitor in the light, you may not notice there’s an issue until it is too late.

Is it Actually Possible to Fix IPS Glow on my Device?

Remember, though, IPS glow cannot necessarily be fixed easily in necessarily every scenario. It’s also not possible to prevent IPS glow simply by buying a better device, as this may not entirely protect your device against IPS glow.

After all, the very nature of IPS panels means that IPS glow is always a significant risk factor – and so you should consider this perhaps before buying a device at all to ensure you’re choosing a suitable device for your needs.

Of course, this often also comes down to personal preferences; indeed, in many cases, IPS glow is highly subjective, and something that could be frustrating for one person may not be such an issue for someone else.

If you own a device with an IPS screen, then you’ll likely experience a far higher-quality image from any angle of the room.

As such, a growing number of people are investing in IPS monitors for their own tech needs – however, it’s critical to keep a close eye on your IPS monitor to ensure it’s working efficiently.

Fortunately, while challenges such as IPS glow can be incredibly frustrating, they’re not impossible to overcome.

So, with a few little tweaks and changes, you should soon be back to enjoying your favorite shows and content without the frustrations that can come with IPS glow.

Hopefully, today’s guide has helped answer any key questions you might have had about “what is IPS glow” and how you can reduce it on your device.

However, if you have any further questions, please don’t hesitate to contact our expert team for further support.