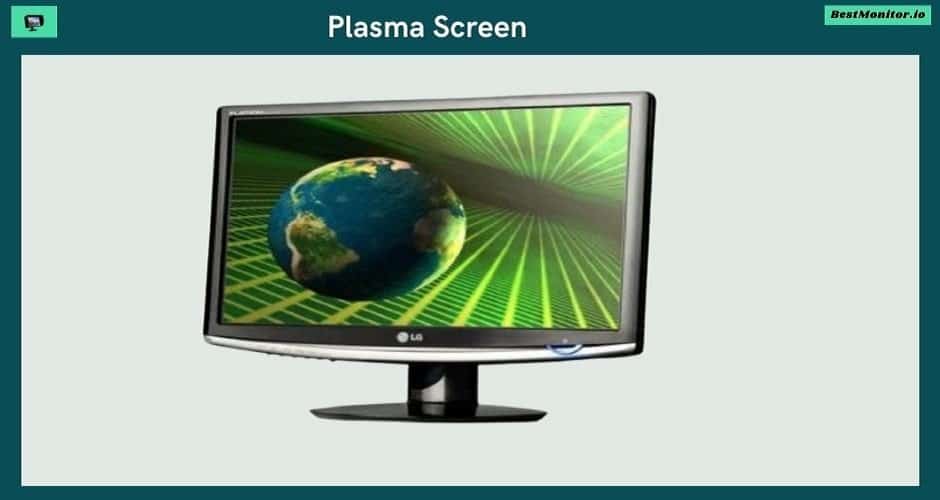 The screen of this monitor is generally produced in a widescreen format. Plasmas are not cheap, and if you decide to buy one, you can pay from about $ 2,000 to about $ 15,000.

Although these monitors are not cheap, consumers love them because they not only offer good picture quality, but they can easily be mounted on the wall and clear much-needed space in your home.

What Are The Complaints About The Plasma Screen?

Some people complain that these monitors reflect more light than an LCD monitor. Users feel that this makes the image show an uncomfortable light.

This screen is also made of glass. This glass also contributes to a glare that appears to be reflected from the screen in addition to excessive lighting.

Because of these complaints, manufacturers are designing these monitors that have anti-glare screens.

Another complaint about these monitors is that they can be easily damaged if they are hit by a hard object.

If you decide to buy one, you may want to consider mounting it on the wall to keep it out of harm’s way or consider purchasing an extended warranty.

How Do Plasma Screens Work?

All types of monitors work by using small pixels that makeup images. The pixels in a monitor are made up of gases and there are thousands of pixels inside this monitor.

These pixels are housed within electrical plates, and send signals to a processing unit that converts them into images that can be viewed.

The images from a monitor are clearer and sharper as they contain more pixels than a normal monitor.

This also explains why the image quality seems more colorful. Because each pixel is individually illuminated, you can get a sharp image no matter what angle you look at the screen from.

What is a Plasma Screen Features?

+ Technology: based on plasma cells, the screen is not updated but remains static until the computer sends a signal of color changes to each cell, due to this characteristic, the eyes are less tired when working. It currently competes against LCD screens and CRT monitors.

+ Resolution: refers to the maximum number of pixels that it is capable of displaying on the screen. A pixel is each of the color dots on the screen.

Read here the full guide of- How to Choose a Monitor?

This is the technical implementation that allows the images not to be seen entirely flat, but to have a different depth effect between the background and the front.

It is worth mentioning that the images must have the special graphic treatment for this purpose, together with the use of special devices at the user level for this (glasses), so it is possible to see such images projected not only with a plasma screen without even with a monochrome CRT screen.

a) Stereoscopic 3D effects: the images must come from a stereoscopic video camera or a special treatment, while at the user level, it is based on the use of physical lenses or specially designed electronic glasses, in which each eye captures different images and they give the effect in the third dimension.

b) Auto-stereoscopic 3D effects: the images must come from a stereoscopic video camera, while at the user level, it must only be placed in a certain position, since the screen emits different images directed to each eye, through paralleling barriers.

Parts That Make Up The Plasma Screen

Internally, it has the electronic circuits necessary for its correct operation, while externally the parts that make up this screen are the following:

The recommended way to clean screens is to simply dampen a clean, soft and lint-free cloth with running water, gently rub the screen avoiding spraying as this can cause the liquid to enter the edges of the screen and damage the screen. team.

The use of commercial screen cleaning “Kits” is also recommended, or that do not have alcohol or ammonia in their ingredients, this is important since several sites on the Internet mention that the use of alcohol combined with distilled water for cleaning.

What is a Plasma Screen contrast? Contrast is defined as the simultaneous opposition between light and darkness, so in screens, this variable determines which of the 2 factors will have priority so that the image on the screen is more perceptible by the human eye. Two types of contrast are handled, dynamic and static.

Static contrast, commercially called real, is related to the difference in tones at a given moment between two opposite pixels (dark and bright), which indicates how ideal the screen is for images with little movement, how to specify it It is as follows: CE X: YYY, that is why we find screens with CE 800: 1, 1000: 1, etc.

Specific Uses Of The Plasma Screen

They have the advantage of lasting up to 11 years, they do not reflect ambient light, they can be viewed well from different angles, they are designed for high definition monitor, they take up almost no space and they can easily be placed on Wall.

· Traditional ray tubes use a beam of electrons to show the image in the tube from top to bottom at regular times, lighting each phosphor to obtain the image. Thanks to this process the lines can be perceived.

Most monitor controls come with a line doubler to improve image quality. The controls of this monitor are capable of reproducing 16.77 million colours, providing sharpness and realism of colour and a subtle gradation between colours.

The format is widescreen or 16: 9. This is the format of High Definition and generally contains DVD movies.

The screen is perfectly flat and without any type of curvature. This causes it to break with that distortion that it does have at the edges of the screen of conventional monitorss.

The brightness of this monitor is uniform over its entire surface. Unlike rear projection systems, which have a brightness that would not be so – it manifests itself when there are bright images in the middle of the screen and darkens at the edges. On the other hand, in plasma displays, the same luminosity appears in all parts of the screen.

A lot of space is saved with Plasma displays. Being so thin and very thin they allow options for placement or installation that conventional monitors could not.

They can be supported on bases or hung on the wall as if it were a painting in a living room and also have a large screen without using a large volume of space in the room.

These monitors allow a wide-angle of our vision. These are 160 degrees (both vertical and horizontal), much more extensive than that of LCD monitors.

This means that a greater number of people can take advantage of good image quality in the same room.

Because this types of Monitor does not use electron beams, like common monitors, plasmas are untouchable to the effects of magnetic fields.

It happens many times with speakers, which contain large magnets, they can produce distortions in the image of the monitor screens (which are called discolorations) if they are very close to the screens.

This does not happen with plasma, leaving the speakers or something similar to be close enough.

Read Also: What is Ghosting on Monitor and How to Solve it?