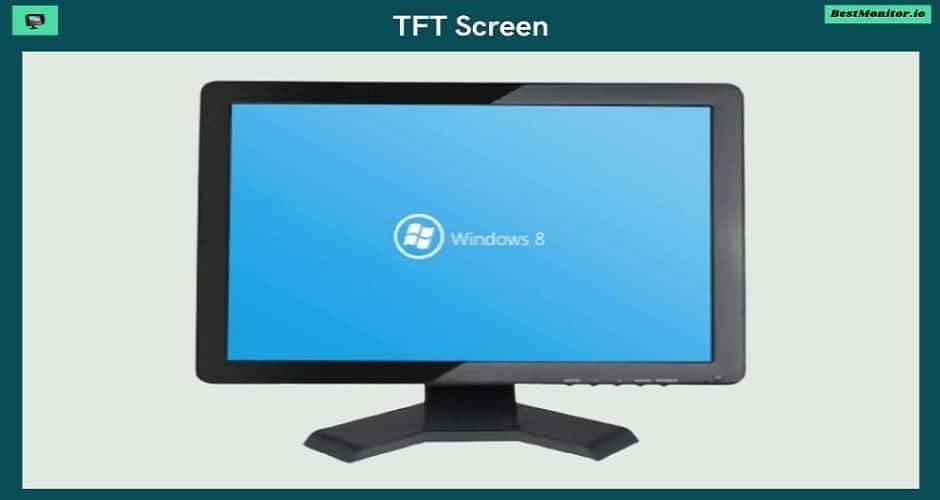 In both computer monitors and televisions, TFT screens have displaced CRT cathode tube screens due to their small thickness, weight and volume, high resolution, and low power consumption, especially with LED backlighting.

The acronym TFT stands for (” Thin Film Transistor “) or thin-film transistor. It is a technology-based on field-effect transistors, that is, an electrode (the sheet that conducts electricity) is placed on a glass plate, on which thin layers are placed, and when each one is activated by means of the electrode, the colors are activated, thus forming each pixel.

TFT monitors competed in the market for laptops and home televisions, against LCD monitors, although there are also versions that combine both LCD-TFT technologies.

Characteristics of the TFT Screen

LCD screens can use two technologies to control pixels:

There are several types of TFT screens depending on the technology used, such as TN, IPS, AFFS, MVA, PVA, or ASV, with each of them obtaining TFT screens with very different characteristics in terms of response time, viewing angle, quality of image, contrast, lightness, depth of black or color gamut.

+ Size is the distance between the upper right corner and the lower-left corner of the glass screen, so the plastic cover that contains it is not considered. The unit of measurement is inch (“). They are basically used on notebook computers, so there are no defined standards.

+ Digital or Analog Control: It is analog if turning on a rigid button is necessary that changes position when pressed and the screen controls use a mechanical resistor (a kind of cylinder that is turned to the left or right by adjusting the screen). It will be digital if it only has buttons to control the setting of the screen and these when pressed return to their initial state.

+ Technology: It is known as static technology since the screen is updated only when a change in the screen is necessary. It currently competes against LCD screens.

+ Resolution: Refers to the maximum number of pixels that it is capable of displaying on the screen. A pixel is each of the color dots on the screen.

The LCD panels of the TFT screens need backlighting to illuminate the pixels from the back, there are basically two technologies:

Parts that make up the TFT Screen

These types of screens are basically installed on laptops:

1.- Flat screen: it is the area in which the graphics are displayed.

2.- Cover: it is responsible for protecting the internal circuits that allow the screen to function, as well as giving the product aesthetics.

3.- Digital controls: these are basically not physical, but it is possible to modify the contrast, brightness, position, by means of software

The recommended way to clean TFT screens is to simply dampen a clean, soft and lint-free cloth with running water, gently rub the screen avoiding spraying it as this can cause the liquid to enter the edges of the screen and damage the equipment.

The use of commercial screen cleaning “Kits” is also recommended, especially the Klear Screen® brand, or that do not have alcohol or ammonia in their ingredients, this is important since several sites on the Internet mention that the use of alcohol combined with distilled water for cleaning.

Specific Uses of the TFT Screen

They are basically used in portable computers, this is already installed in certain devices, so it is difficult to find the best monitor for a computer or television of this type.

It is found in devices such as data collectors, personal digital assistants (PDAs), and laptop computers.